Oxford Delays on A* Grade Offers 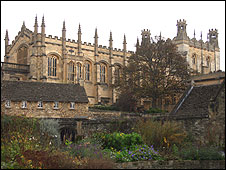 Oxford University says it will not make conditional offers for places based on the new A* grade at A-level when it is first awarded in 2010.

The higher grade is intended to identify the most able students and to help universities choose from among many candidates with A grades.

But there are concerns it will become dominated by independent schools, hitting efforts to widen participation.

Oxford University says it wants to see how such A* grades are distributed.

Pupils starting A-level courses this autumn will be the first to be considered for the upper grade of A*, which will be awarded for marks of 90% and above.

It is expected that only about 3,000 pupils will get A* grades in three subjects – compared with about 26,000 currently achieving three A grades.

But there have been concerns from universities that this group of high flyers receiving A* will be disproportionately drawn from independent schools – and that if these grades are used for admissions that it will mean fewer state students in top universities.

The Department for Children, Schools and Families says that such fears are “unfounded”. It projects that 38% of three A* grades would be likely to be awarded to independent school pupils – compared with 33% of pupils currently achieving three grade As.

Oxford University says that it is not ruling out using the A* grade in future, but initially it will adopt a wait and see policy.

“We will not be making any conditional offers based on A* in its first year. We always like to see how new grades or qualifications play out,” said a spokeswoman.

“We are not looking to do any social engineering. If it becomes apparent that A* grades are a good indication of aptitude for Oxford courses, we will be very interested in looking at them.”

The university says it wants to see the distribution of A* grades by school type and in terms of the numbers of pupils receiving the award.

“Also with any new grades and qualifications we are interested to see how they correlate with our own selection procedures, such as aptitude tests and interviews.”

Oxford’s stance emerged as a leading head teacher was saying A-levels no longer provided teenagers with the skills they needed for the future.

Melvyn Roffe, head of Wymondham College in Norfolk and the new chairman of the Boarding Schools Association, said the qualifications should be phased out and replaced with others such as the International Baccalaureate (IB).

In an interview with London’s Evening Standard he criticised ministers for for making “half-baked changes” to the A-level system.

“I wish the government would say ‘A-levels were great 50 years ago’ rather than saying ‘we have to keep to the gold standard’,” he said.

The 1994 Group of universities, representing research-based institutions such as Durham and Exeter, has already raised the issue of the A* potentially narrowing the recruitment pool.

Universities will be helped in finding the most able students from a growing number with A grades. More than a quarter of A-levels awarded last summer were A grades.

A report from 1994 Group says there are concerns that the A* grade will create a “dynamic that might make it more difficult for research-intensive universities to maintain a balanced intake between applicants from different backgrounds, such as those from private and state-funded schools and colleges”.

But the government rejects the idea that the higher grade will have the unintended consequence of narrowing access to the most sought-after university places.

“Fears that the A* will give a significant advantage to independent school pupils are unfounded,” said a spokeswoman for the Department for Children, Schools and Families.

“Modelling work based on the 2006 A-level results shows there is no evidence that differences in A* attainment by pupils will be significantly greater than for A grade attainment and that the introduction of the A* will not greatly alter the distribution of achievement across school types.”

“It is up to institutions to decide how they balance their assessments of applications with their desire to be fair and to offer places to applicants with the greatest potential, regardless of background.”

• Academics at Oxford University are helping to develop the new Advanced Diplomas in academic subjects – science, languages and humanities – being introduced from 2011.

Oxford’s director of undergraduate admissions, Mike Nicholson, said: “Our interest is in helping to ensure that the Diplomas can deliver the highly rigorous academic content and study skills that candidates to highly competitive universities need.”