No Chairs and Tables for Five Years of Study 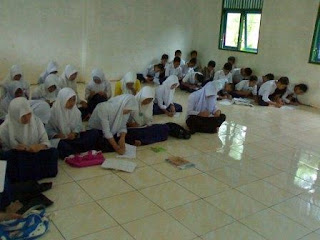 By Irfan Nugroho
Too much desperate to read a report of Kompas.com titled “Alamaak…Lima Tahun Belajar Tanpa Meja dan Kursi!” (Oh my ghost… Five years of study with no chairs and tables).

Sixty elementary students at SDN II Karang Bahagia, Bekasi District, West Java, have been running teaching and learning activities with no chairs and tables on classrooms for five years. They learn the school’s lessons while sitting crossed-leg.

The above situation is on the contrary to the school’s name Karang Bahagia, loosely translated into the “Coral of Happiness.” It gets even worse when we take a look at the school’s locations in the heart of Bekasi District.

Education in Indonesia gets never be away from problems. Only at the beginning of Soeharto’s New Order regime did Indonesia’s education find its heyday. The history notes that in the 1970s, Indonesia sent a number of teachers to Malaysia, just to “teach” the Malaysia that was going to grab Independence from the British colonials. 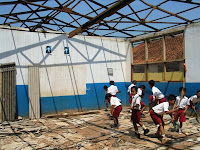 However, the situation got worse from time by time, peaked in 1998 when Indonesia was suffering from terrible economic downturn. Since that time, Soeharto’s regime found its ruin.

The Reform Era sounded hope for better education in Indonesia. And it comes true when the government sets 20% of the State Budget and 20% of the Regional Budget for education sector.

Then, why does such an “unlucky fate” of Indonesia’s education still persist? Amidst the massive campaign on free education by the Indonesian government, such a terrible situation should be questioned.

Well, financial improvement is not enough to build strong Indonesian people based on the strong educational foundation. There should be another key, transparent governance system that can control the use of the huge budget.

With the big amount of money allotted for education sector, chances for corruption get higher and bigger. Even when the education budget was still in low, the corruption numbers at this sector were also high.

For that reason, there is a need to build a transparent governance system aimed at controlling the use of education budget. Indonesian government has Corruption Eradication Commission (KPK).

But, KPK has not touched this sector yet amidst its active movements to decrease the number of corruption in some sectors in Indonesia.

Corruption alone can actually be prevented if only Indonesia’s education system emphasizes on how to create the Indonesian people who are diligent, religious, social dedicative, and clean from corruption.

Unfortunately, Indonesia’s education system is not able yet to create such “utopist” people. Worse, KPK’s efforts to eradicate corruption are still far from perfect. Therefore, such an “unlucky fate” of the sixty students above, and Indonesia’s education generally, will keep high.
Photo:
NurulAzhar.Wordpress.com
Dibaca: 1,020

When a Historic School Altered into a Mall

Sermo Dam: Cries Followed Its Making, but Now It is Neglected

Corruption alone can actually be prevented if only Indonesia’s education system emphasizes on how to create the Indonesian people who are diligent, religious, social dedicative, and clean from corruption.Unfortunately, Indonesia’s education system is not able yet to create such “utopist” people. Worse, KPK’s efforts to eradicate corruption are still far from perfect. Therefore, such an “unlucky fate” of the sixty students above, and Indonesia's education generally, will keep high.

@ Genial: Indeed, it's been about a month Indonesia commemorate National Education Day. Unfortunately, that was only a day, nothing special from it. That was only celebrated routinely with no effort in term of education betterment. 🙂

Hello.. I have just changed the color. I was feeling like a more serious color :)It also is something nice for all of my very loyal bloggers that pop in all of the time.Being happy doesn’t mean that everything is perfect. It means that you’ve decided to look beyond the imperfections.

indonesian educational system are a mesh

i am visiting your site now

Oh my God…This is still happen in Bekasi which consider as the big district near Jakarta.Well I'm so embrrass with this

Iam so sorry fren because Iam late comment for you… bxoz Iam buzy for this moment… yeah maklum !!!But I will give you something commment, yes sure !!Yes you writing is good with ideal spelling … can you teach me how to learn english ? I like your post…. keep moving men…

what a sad situation, hope we could eradicate poverty

@ Dorothy: Yes, your blog's new colour appears to be more serious. I like it!@ danang: (That should be “mess” instead of “mesh” hehehe) Yes Danang! I Know you're Indonesian as well as me. All Indonesians know such a terrible situation but our government does only make few efforts to fix them.@ berita unik: Yes my friend! That happens in Bekasi, one of the biggest places in Indonesia. Unfortunately, such a terrible education situation happens in a big city :(@ Turkey: Waalaikumsalam ya akhi… I'm doing fine. Well, how about Turkey? Wish everything is fine there :)@ Kontes NOthing Impossible: Oh, nevermind. I know you're a good commentator. Well, not at all, I'm still learning as well as you. All we must do is just keep learning and learning. Thank you my friend :)@ arkasala: Hm, ya gitu lah Pak! Kita orang kecil dengan dana yang sangat minimal dan juga kekuatan yang terbatas harus terus berjuang keras. SEdang pemerintah dengan anggaran segede itu justru …….@ shiela: Wish your prayer shiela. Let's fight againsts poverty !

so Sad….hoping for the best…

so pitty my friend..by de way eduction my carry on whatever it takes..my Allah bless us..aminnn

hello friend…visit ur blog with $$mile….

$afe ur healthy with $mile…

Hi Irfan, Thanks for droppin by my blog and leaving a comment, your always welcome to drop by if your online, no problem my friend :)Wish you and your family a lovely weekend 🙂

Hi my friend! I wish pleasant weekend. Greeting from HUNGARY.

First I want to congratulate you for this amazing blog!We Are Pleased To Announce The Launch Of Movies Gallery 09, Mobile Movies in 3gp format, Reality show, Upcoming Movies 09 Trailer, About Dubai,Real Estate, Tips Of Career And Many More. To start just go to http://computerkeyboardshortcut.blogspot.com/We hope you like it. Please send us any feedback on the movies and help us improve the sites further

Anyone can give up…thats the easy way..but to hold it together when all odds are against you….now that is true inner strength :)”

Hi friend… I'm visiting this great blog. Many useful things in this blog. I love it! Visit me back please… 🙂

education is feasible only a dream

Hi ! Friendly greeting from HUNGARY. Thanks for your visit. I wish you a beautiful, happy weekend. God bless you and your Family!

So sorry, I'm late visiting back your blog. On last week, I didn't spare time for blogging, chatting. But, keep up spirit bro. Keep in touch and have a nice day…

the government should give more funds for education instead of neglecting it, our future lies with the present generation, so they should be properly educated.