.fullpost { display: inline; }
By Irfan Nugroho
Scheduled on July 8th, 2009, Indonesia is going to hold presidential election. Three president candidates are competing against each other to be the first person in Indonesia.

Many issues surround them, ranging from neo-liberalism, trillions rupiahs of horses, military defense, and religion. Amongst those issues, the issue of hijab disturbed me so much.

The politics of hijab can be either marketable or meaningless. One president candidate is proud of his wife’s hijab – thus is considered “marketable,” but a general leader of Indonesia’s greatest Islamic party views hijab as meaningless. 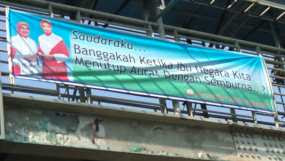 As I came across a street in the city of Yogyakarta, I found an eye-catching poster of one president candidate, Jusuf Kalla-Wiranto, saying, “Saudaraku, seharusnya kita bangga jika dua ibu Negara kita menutup auratnya dengan sempurna…” (O my brothers, we should now be proud if our two mothers of nation wear hijab perfectly…”

Taking a deep look at the above rhetoric, it appears that Islam is still considered marketable in the context of Indonesian presidential election. Apparently, shouldering Islamic issues in presidential campaign promises higher votes. Indeed, well all know that the number of Muslim in Indonesia is at highest.

At this point, we, Indonesian Muslims, must realize that the statement came out of a nationalist party Golongan Karya, the most dominant party at the regime New Order Era of President Soeharto.

One question then comes up to my mind. Is that statement truly from the intention to uphold Islamic dress-code in Indonesia? Or, is this the one of so many ways of attracting voters’ sympathy, especially Muslim voters? 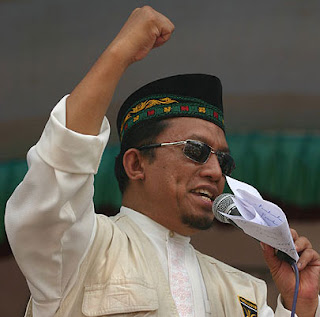 As I read that poster, I remembered a statement from the general leader of Prosperous Justice Party (PKS), Tifatul Sembiring. In an occasion, he said, “Will a piece of veil covering head of Muslim woman be able to cope with our economy, education, poverty problems? Will they be solved by a piece of veil?”

Tifatul Sembiring, as the other highly officials of PKS, can be said an Islamic scholar. His understanding about Islamic teachings is of course better than the common Indonesian Muslims.

The statement, however, hurt me, as Muslim, and many Indonesian Muslims, especially Indonesian woman Muslims. A leader of an Islamic party views hijab meaningless; plays no roles in the betterment of economy, education, and poverty empowerment.

Well, a piece of veil covering the head of Muslim woman surely cannot cope with the betterment of Indonesian economy, education, and poverty. Physically it cannot, but let’s put this straight.

A good Muslim woman should cover her genitals using hijab worn properly. A piece of hijab should cover hair, chest, foot, and all parts of woman bodies, except for the face and palm of hand.

As the leader of Islamic party, sure Mr Tifatul Sembiring knows very well about this, but why…?

Beyond a piece of hijab, there is Islamic beauty; there is high Muslim woman’s dignity; there is a safe from sexual harassment; there is a picturesque of a good Muslim mother, a mother who is expected the best Islamic generation would be born from her.

As an Islamic scholar who immerse in politics, sure Mr Tifatul Sembiring knows more features of hijab, but why…?

Finally, on the shoulders of the best Islamic generation, we do embed our dream of a better future. From them, we do believe that the betterment of economy, education, and poverty is possible!

The Fall of the West and the Rise of Islam: Islam Comes as Solution to the West’s Biggest Threat