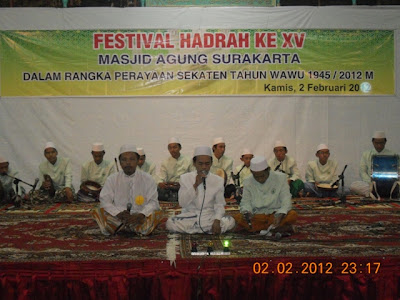 A number of Islamic event were held at this event, summoning people to take a close view of what Islam is and more importantly, the present Sekaten Festival is held to commemorate the beloved Prophet Muhammad Salallahu ‘alaihi wasalam.

I personally cannot agree with the above two events because they are not taught in the Islamic teachings based on the understanding of the early generation of the Muslim ummah.

Well, there was a unique event held as part of the Sekaten Festival this time; that is the celebration of the 15th Hadrah Festival of Masjid Agung Surakarta.

Hadrah Festival is an ‘Islamic’ music festival wherein some groups of Hadrad performing arts take part in the festival to perform some Islamic songs themed about commemorating and showing deep love to the Prophet Muhammad salallahu ‘alaihi wasalam.

In this year’s Hadrad Festival, which was its 15th, 14 groups of Hadrad performing arts took part within, competing to be the best Hadrah groups.

The festival alone was held at night on February 2nd, 2012 after the Isya’ prayer at 08:30 PM until 00:00 PM at the veranda of Masjid Agung Surakarta.

One by one, 14 Hadrad groups from around the city of Solo performed their best Shalawat songs, themed about their love and yearning of a great man named Muhammad Ibn Abdullah salallahu ‘alaihi wasalam.

At this festival, I see that in Indonesia, Islam has really immersed with the traditional Javanese cultures, and therefore I saw that some groups recited the Shalawat followed with musical orchestra and traditional dancing arts. 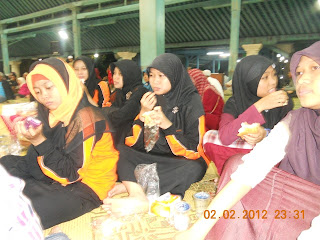 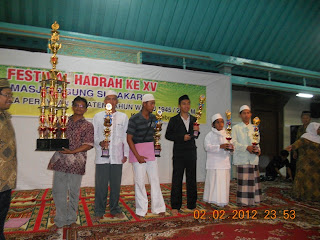 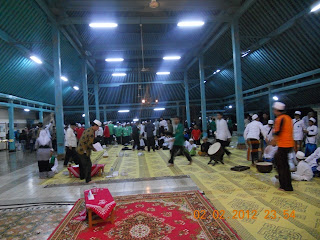 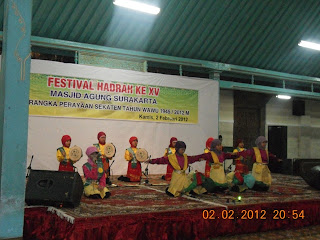 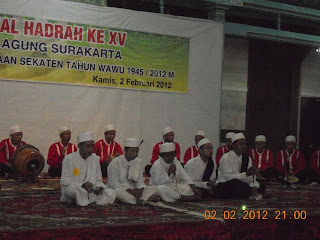 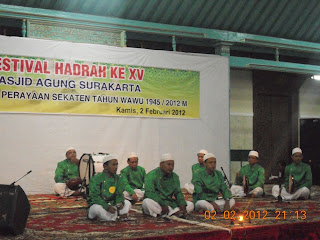 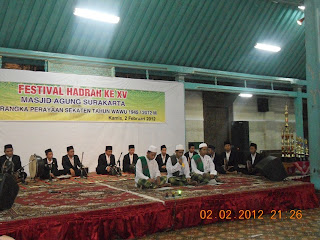 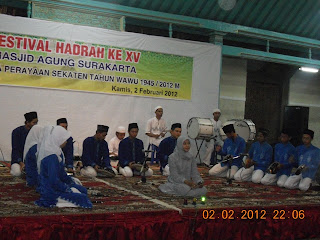 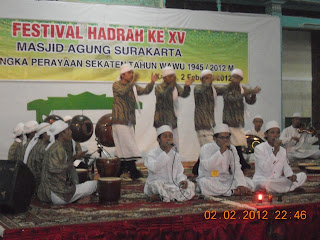 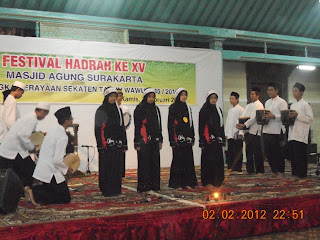 Shalawat in Islam
Hadrah, as some people said, is an Islamic art of singing the Shalawat recitation. Shalawat is a supplication and prayers dedicated to the Prophet Muhammad salallahu ‘alaihi wasalam.

Shalawat is taught in the Islamic teaching based on the saying of the Prophet Muhammad, “Do not take my grave as a place of habitual ceremony. Send prayers upon me, for verily your prayers reach me wherever you are,” (Recorded by Abu Daud and Ahmad, and considered Shahih by Al-Bani).

It is also a medium of getting abundant rewards from Allah as the Prophet Muhammad said, “Whoever sends a prayer upon me; Allah sends ten upon him,” (Recorded by Imam Muslim and a Shahih Hadith).

“The people who will be the nearest to me on the day of Resurrection will be those who supplicate Allah more often for me,” (Recorded by Imam At-Tirmidzi and considered Hasan Hadith).

Shalawat is form of love by the Muslim ummah to the Prophet Muhammad, a figure with outstanding characters and mercy.

More importantly, added Ibnu Qudamah, the one who loves and performs the teachings of the Prophet Muhammad will find his great sins erased, and therefore Allah saves him from the Fire in the afterlife.

Reading Ibnu Qudamah’s explanation on Shalawat leads to an understanding that the form of love to the Prophet Muhammad is not merely by singing beautiful Shalawat-themed songs as what can be seen at the present Hadrah Festival.

There should be follow up from whoever sings Shalawat-themed songs to also try the hardest to follow the teachings of the Prophet Muhammad salallahu ‘alaihi wasalam.

One of the unique things about Islam in Indonesia is the fact that the noun ‘Shalawat’ has turned into “Shalawatan” (with suffix ‘an’) and the mere “Shalawat” (without any affix).

It is because of their abundant love and therefore leads them to perform Shalawat in a way that was not taught by the Prophet Muhammad and the early generations of the Muslim ummah.

For that reason, clearly I only want to say that performing shalawatan in that manner – using musical instrument – is not recommended in Islam, thus it is categorized an innovation (bid’ah) in the Islamic teachings.

However, I urge the Muslim ummah to send the prayer upon the Prophet Muhammad as many as they could, of course in the right manners.

In a Shahih Hadith recorded by Imam Bukhari said that the best kind of Shalawat is reciting the Ibrahimi Shalawat, that says:

Those two kinds of Shalawat are enough to express our loves to the Prophet Muhammad salallahu ‘alaihi wasalam.

While the first mentioned Shalawat is often recited after the Tasyahud in Shalat, the second one can be read wherever and whenever, but not when we’re in the toilet or bathroom.

There are the right times to read the Shalawat as explained by Syahatah Muhammad Shaqr in his book, “Utamakan Shalawat: Faedah dan Tuntunan Bershalawat Sesuai Sunnah” (Indonesian translation).

1. In the Shalat at the last Tasyahud
2. In the Shalat al-Janazah at the second Takbeer
3. On Friday
4. After the Adzan (the calling for prayer)
5. In the circle of Islamic teaching and learning
6. When the name of the Prophet is said
7. When entering and getting out of the Masjid
8. When sending wishes in prayers
9. When reading Qunut
10. Ten times in the morning and ten times in the afternoon, and
11. In every break of breath of the Eid takbeer. Wallahu alam bish shawab.

Photos by: Harlina, who is currently memorizing Quran at the Masjid Agung Surakarta.

Hadrah, as some people said, is an Islamic art of singing the Shalawat recitation. Shalawat is a supplication and prayers dedicated to the Prophet Muhammad salallahu ‘alaihi wasalam.