I’ve been living in a small city near the city of Solo, Central Java. But I’ve just known that there is another beautifully elegant royal mosque as beautiful as the Mosque Agung of Surakarta. The one I meant is the Royal Mangkunegaran Mosque of Al-Wustho.
On April 5th, 2009 I was having leisure time from the busy living of Yogyakarta. I spent about some hours hanging around the city of Solo by riding the only motorcycle I have, my beloved Vega-R. There was no certain destination I wanted to reach at the time before I was stranded at a mosque in the central part of the city. The mosque was named Al-Wustho, an ancient mosque that is under the management and supervision of Surakarta Mangkunegaran Palace.
That was about 12 a.m. so I had to go for the dzuhur prayer. I got in to the mosque and was simply amazed with the ancient nuance of the mosque. The mosque, based on the data from the internet, was built by Kanjeng Gusti Pangeran Aryo Adipati Mangkunegara First (the authoritative ruler of Surakarta at the time) in 1495 A.D. Hence, for 514 years the mosque has been standing in elegance.
When I passed the entrance gate, my eyes could not move from watching an intricate set of calligraphy decorating the entrance gate. The calligraphy is in green, and the gate is in white. I cannot read it because I’m not good in Arabic, but the only thing flashed on my mind is, “How wonderful this is! An ancient mosque employs such a beautifully intricate calligraphy on it, in fact the mosque is owned by a Javanese kingdom.” 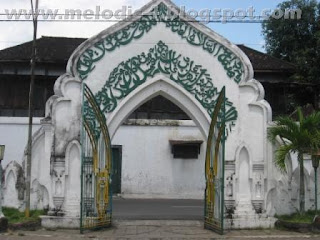 The entrance gate
What the more amazed I was at that time because indeed, the mosque has a number of Arabic calligraphies on it. I can see there are some sets of Arabic calligraphies on other parts of the mosque; like on the markis/kuncungan (awning in front of the veranda), on the soko (pillars), on the pulpit, and on the maligin – a cubic small tent-like building next to the mosque that was functioned the place for conducting khitan (circumcision).
The makis is located precisely in front of the veranda. Painted white, the markis was decorated with a set of Arabic calligraphy rounding the border. Another feature for this markis is its carvings. It resembles an entrance gate to a palace, but in small-size ratio. 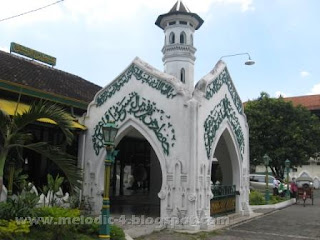 The makis
Once again, unfortunately I’m not good in Arabic, but at least I could enjoy the beauty of Arabic calligraphies carved on the four soko (pillars) supporting the roof of the main building. The yellow Arabic calligraphies were carved fancily on each pillar painted in green. Wonderful and awesome! 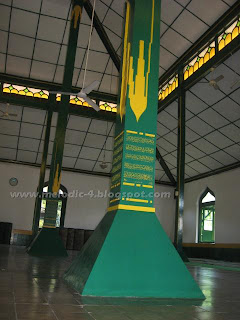 The Soko (Pillar)
When first I saw the maligin, I questioned to my self, wondering what this building actually is. Then I came up to Google and found that it is maligin. It was formerly used a place for conducting circumcision for children going mature. As the other parts of the mosque, the maligin was painted white some decoration in green. Once again, the decoration is a set of beautifully baroque Arabic calligraphy. 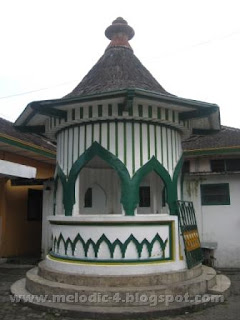 The Maligin
Above those parts, the most intricate set of Arabic calligraphy is the one found on the pulpit. The calligraphy was carved on the pulpit that was made of teak wood. It appears that the pulpit was made by the Jeparanese carvers; but, I still do not know for sure about it. There is no data supporting it because when I asked the mosque management, they suggested me to ask Mr Google. Anyway, thank to the mosque management for giving me permission to take the photograph inside the mosque complex. 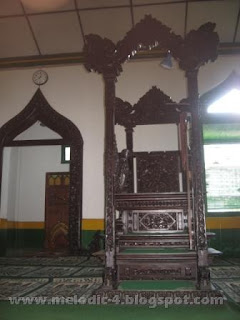 Other astonishing features of the mosque are the minaret and the bedug, a typical Javanese percussion made of cow skin. In the past, when modern sound system devices were not discovered yet, the adzan used to be conducted by three people together. 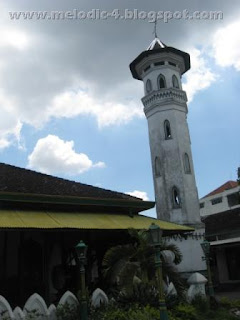 The Minaret
The strange one, for those who are not originally from Java, is the name for the bedug. It was named like the name for a noble man; that of Kanjeng Kyai Danaswara. It stands at a corner of the veranda, next to a black kenthongan, just another Javanese percussion made of a hallowed timber. 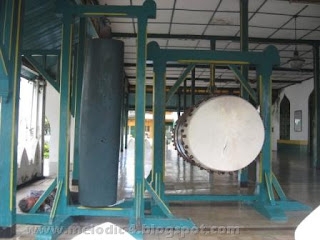 The Kanjeng Kyai Danaswara Bedug
Here is my amazement of an ancient mosque located in the heart of Solo City, Central Java Province. The name “Al-Wustho” alone was given by K.H. Imam Rosidi, a religious advisor for the Mangkunegaran Royal Family in 1949. Are you going to Solo? Don’t forget to take a visit to the mosque and enjoy the elegance of an ancient mosque beyond a number of intricate Arabic calligraphy.
BACA JUGA:  Yakin Masih Enggan Berhijab?

The Real Champion of Indonesian Positive Football, Persipura Jayapura: Congratulation to You...!