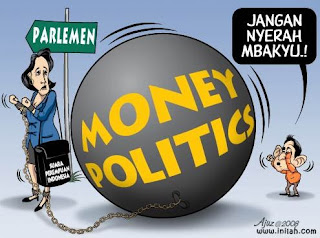 In a leisure time at my tranquil village, I had a small talk with an old man after the Isya prayer. Just a small talk that I thought it would last longer when suddenly I asked him, “Did that caleg (legislative candidate) win the election?” Then the old man told me that the caleg had successfully won the election in my district. He also revealed that the caleg spent about 300 million rupiahs to be elected. I was amazed hearing that amount of money.

I got more amazed when he also said that there is another caleg spent more than that amount of money. Another caleg even spent about one billion rupiahs to win the election, thus the caleg could sit in the House of Representative in the provincial government.

The old man then quizzed, “Are they going to serve on behalf of us, or mere themselves, as they have spent a lot of money to be elected?”

Yes, I do understand that question. I do personally think that the elected calegs will only seek for some amounts of money that are equal, but mostly bigger, to the amounts they had spent to win the election. Consequently, their work as legislators in the House of Representative alters from serving on behalf of common people to serving to themselves, to their wealth.

Indeed, this is one of the many problems are being faced by the Indonesian people now. Democracy is only for those who have money on their pockets. No money means any rights to compete in election.

For some people, such a fact is not strange anymore; that’s why some people get abstain from using their rights to vote. That’s why the number of golongan putih-golput (blank voter) in the most recent election creeps up higher. It looks that they get bored with the calegs’ behavior in the House of Representative.

Yes, we all often see that some legislators do not attend the hearing sessions. Some others attend the hearing, but they do nothing, sound anything in the hearing. Worse, some legislators fell asleep in the hearing session; as if they have forgot what they should actually do in that elegance building. They get luxurious services from the state, but they don’t even care about those who live under the poverty. They receive high salary from the state; but still, they beg the state to provide them with expensive laptops. In fact, they can buy that expensive laptop with their own money.

They issue state policies, but it seems they don’t even care about how to apply them in the fields, in the bottom levels. They make regulation, but they are invulnerable from the regulation; as if the regulation is only for the commoners, not for the people having a lot of money who can buy the justice in this country.

The old man talking with me got mad over these. It appears he get disappointed looking at his legislators’ behavior in the House of Representative.

“If the situation goes on longer, can you imagine what it be? I think it’s better Indonesia to sell this country to the one who can buy this,” said the old man ending the conversation on this country’s political situation.

That’s one of the many voices from the Indonesian commoners about our country, about our government, and about our legislators who should act on behalf of them, but the real facts show different things.

This is real; this is the truth, Man! Quoting the old man’s question, “Can you imagine what it be if the situation goes on longer?” I ended this writing.

The Royal Mangkunegaran Mosque of Al-Wustho: Beyond the Calligraphy, There Is Elegance

i hate money politic. but i like politik with money