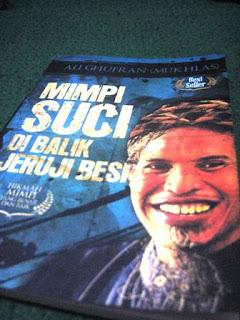 People would remember clearly this smile, all the times

You might ignore any dream you have when you are sleeping, but please never do it anymore after you read this book. Now you must know that within a dream, there is worthwhile learning can be taken from as long as our dream are good and right, or properly called Prophetic dream. Above all, we must contemplate this verse; Quran [3/191] and Quran [37/96]
According to Mr Ali Gufron, there are three kinds of dream. They are first, the right dream (aruu’ya ash-shadiqah); a dream that is possibly true; and the empty dream/meaningless (adhghaatsu ahlaam).

The Right Dream (aruu’ya ash-shadiqah)
This is a visionary of human’s spiritual experience, which reveals strong rightness through a clear language that shows various learning but consistent. This kind of dream alone is then divided into three others: the right dream that comes true; the good dream; and the symbolic dream (whisper).

The nature of the right dream that comes true is informing the rightness. This is also part of Prophetism. Further explanation about this, please read Quran [48/27]. This kind of dream consists of two others: a dream that is transparent, clear, real, and its language tells the reality hence no need of ta’wil (interpretation) [Quran 37/102 and 48/28]; and a hidden and gloomy dream that tells the truth as well as notification hence need to be interpreted based on the Quran and hadith [Quran 12/4].

The nature of the symbolic dream (whisper) is usually about the way to solve people’s problem in the real world. Sometimes people are facing a big problem and they cannot cope with that. Upon Allah’s bless, those who are burdened with such problematic suffering would get a whisper through a dream.

The Dream that is possibly true
This kind of dream usually reflects people’s thoughts and actions in the real world. People do something and unconsciously he has recorded their actions on their mind. And they would bring their actions in their dream.

The above kinds might be true, based on the hadith, if people have their dream on these times. First, when people are taking a nap (before or after the dhuhur prayer time), and secondly, when people are taking a sleep for a while after the night prayer (tahajjud/lail prayer). The good and right dreams might come true if only the one who dreamed it tells to other people; thus the Prophet told us not to tell any bad dream.

The Empty Dream/Meaningless (adhghaatsu ahlaam)
People usually find it hard to memorize this dream because the nature of this dream is unsystematic. The learning from this dream is also natured different from the real world people are facing. This is categorized bathil (misleading) and no need to be interpreted because this is from satan. There are four kinds of such an empty dream: hallucination/wet dream; scary dream, dream of people’s past and chaotic dream.

Here is the very brief review about the book written by Mr Ali Gufron when he was in jail. The main nature of this book is, perhaps, informing its readers about their (the trio jihaders of Mr Ali Gufron, Imam Samudra, and Amrozi) Prophetic dreams. Mr Ali Gufron alone had ever dreamed of meeting the Prophet Muhammad for four times during his entire life; while Mr Amrozi dreamed about Him only once.

When Mr Ali Gufron was in jail, at Nusakambangan, Central Java, he dreamed about meeting the Prophet Muhammad at a date palm field. In this dream, he saw the Prophet Muhammad was along with his friends walked in the field, but Mr Ali Gufron alone was only seeing Him from afar. The date palm alone, referring to the book of dream interpretation, is interpreted as an Arab noble man who gives so much benefit and is a clever as well as an imam. Mr Ali Gufron alone thus said this dream refers to the figure Asy-Syaikh Al-Mu’allim Abu Abdullah Osama bin Laden.

I think this is enough. If you want to know the other Prophetic dreams having by the trio jihaders of Ali Gufron Amrozi, and Imam Samudra, read every single page of this book carefully. In addition, this book is one of three books pakced in a single package namely Kafilah Syuhada.

But please, before reading this book, put off your feeling of hatred to these people. You might say they were “terrorists,” or “khawarij” (rebellion against the holy Islamic teachings), but from reading this book you will see how nice, wise and smiling these people were. They treated all people, either Muslims or non-Muslims, in very very good ways. If you have ever met them directly, sure you cannot see they acted harmful. And then, why people do so scare of them? 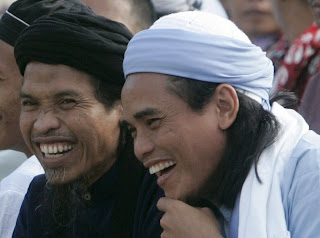 Look at their smile….. 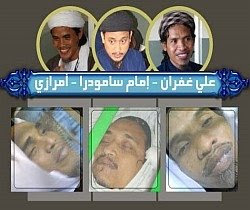 Look at their faces. Can you see that they are smiling? That is the smile almost the same when they’re alive.
BACA JUGA:  Dua Santri Maahad Ulul Albab Sukoharjo Kecelakaan, Satu Meninggal, Satu Kritis. Mari Bantu

Sekuntum Rosela Pelipur Lara: One Last Answer to Those Questioning the Jihad of Cyber Mujahid