Irfan Nugroho
As usual, 13th December 2011 began with the Subuh prayer activity. There were no changes in the number of the Subuh congregation that day. Still, there were only no more than 10 people at that time.

This day, all buses began to as the rooster they had been set far before the APG was started.

For your information, all the special buses departed from the athlete village every 15 minutes, and therefore I did not need to book for buses earlier.

From the total 10 special buses (wheelchair-able buses), six buses took the route from the athlete village to the venues located nearby the Manahan Stadium. 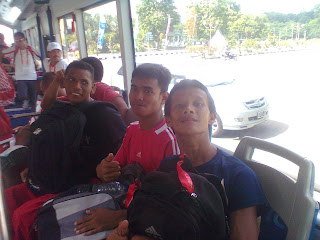 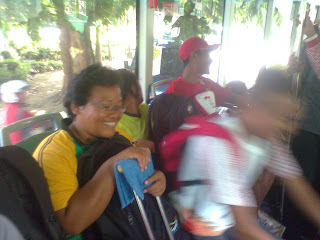 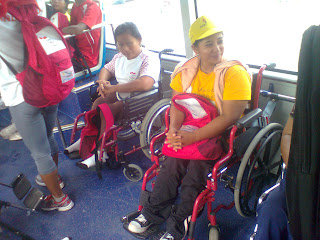 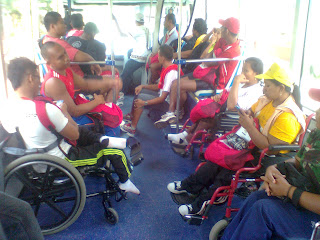 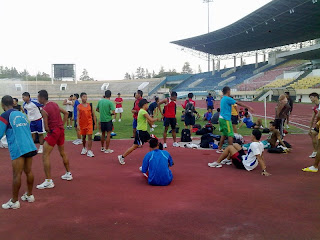 Tears Like Rain
With such an arrangement, there should be no athletes neglected in venues.

However, there is a unique experience about this.

It started when she accompanied her athletes to a venue for field test and practice.

I don’t know for sure, if it is her fault or the fault of the bus’s operator, and therefore her athletes were stuck at the venue for more than an hour.

Consequently, she should get the first complain from her athletes just because there was no sufficient communication between her and the bus operator.

In a sharing circle between me and the other LOs, she looked to blame the bus operator for not telling him that the bus had already arrived at the venue (in fact, my friend admitted that she was inside the venue – I don’t know for sure what she was doing that time).

And in my opinion, she should be outside the venue, responsible for stopping the bus just in case the bus did not stop for some other reasons.

No matter what, the lack of communication is the onset, and therefore she should not blame the bus operator. Likewise, the bus operator should initiate to stop for a moment, looking for the one who was in need of his service.

Emotionally poignant tears brimmed over her eyes, and therefore everybody in the circle took sympathy on her.

And the lesson I could take from this is, “Actively ask and confirm to those of the other divisions.”

The Rain
The third day, dated on 13th December 2011, was not a hectic day like the two previous days.

Every thing ran well as learning from the two previous days could be implied, and alhamdulila.. I could take a nap after morning training session with Indonesian athletic athletes at the Manahan Stadium.

Likewise, the officials and coaches of the Indonesian athletic athletes let me stay at the athlete village to take rest, did not need to accompany them for the afternoon training session.

Grueling schedule like the two previous days was available no more and it’s a good chance to lay down the body for about three hours at noon.

And see what? There was a heavy rain at the afternoon training session.

Areas around the Manahan Stadium, including the main football field and the athletic arena were all full of water, flood!

I could see that when most of them should take their shoes off along the way the athlete village’s bus stop to the Indonesian athletics’ block.

“Did you train for sprint or swim?” jokingly I asked them.

Well, the rain is an unpredictable factor that should get much attention from those event organizers.

Later I will tell you how the rain should change an important event at the sixth ASEAN Para Games 2011.

However, as a Muslim I am not allowed to say something bad about rain as it is Allah’s favor on earth and all the living creatures.

The Prophet Muhammad used to show his cheerful face when the rain falls. His wife, Aishah, asked, “Why did you do so?”

“I am worry about the rain will be calamity for my ummah. And therefore when the rain falls I say, ‘The rain is the mercy of Allah,’” (Recorded by Imam Muslim).

In another hadith, the Prophet Muhammad taught that amongst the so many things that make one’s prayer is made true is a prayer recited when the rain is falling. And I wished that all the Indonesian athletic athletes did the prayer for their sake when the rain fell that time. Ameen.