The Opening Ceremony of the Sixth ASEAN Paragames 2011 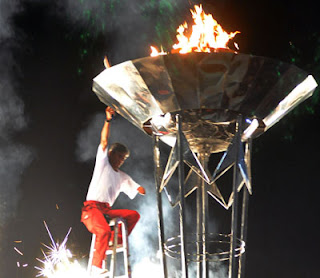 However, it’s not the figure of mister vice president that made the event unforgettable, but there were many more great great moment this day, at the opening ceremony of the sixth ASEAN Paragames 2011.

My Indonesian athletic athletes didn’t need to have morning training session that day because the Manahan Stadium was sterilized for the preparation of the most-anticipated and long-waited moment.

They did small training at the athlete village, spending the day for a great honourable moment for those with physical disabilities.

The ceremony alone was started on 7:30 PM when more than 10,000 people flocked the Manahan Stadium.

All athletes should be at the Manahan Stadium before 5 PM, however.

And this procedure made me and my liaison officer partner worked very hard to tell the athletes, to make them ready at the venue on time, and to book the buses for taking them to the venue.

Tiring, indeed, but it was an honour for me to serve my brothers and sisters with physical disabilities on that day and during the ASEAN Paragames 2011.

My entourage could be available at the Manahan Stadium at 4 PM, and I found that it was less crowded and less hectic if my entourage arrived precisely at 5 PM.

Waiting for more than two hours outside the Manahan Stadium was not a big problem for us, the liaison officers, the athletes, and the team’s officials.

Everything was fun and full of happiness. We shared and cheered each other, we sang Indonesian athletes’ anthem, and we gave a yell of support.

Some athletes were busy with taking photographs, because some could not deny that the Sixth ASEAN Paragames was their first experience to take part in an international para sports event. 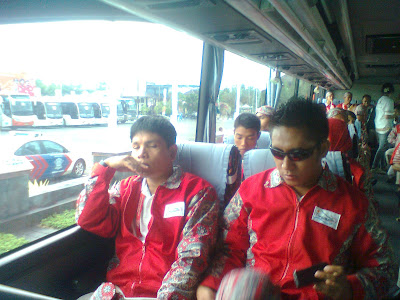 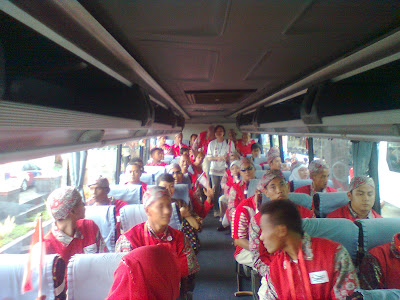 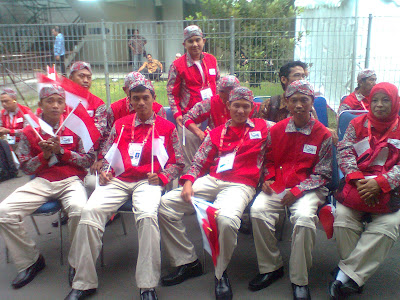 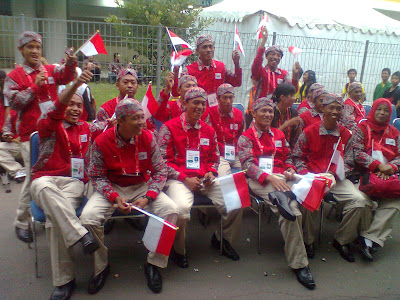 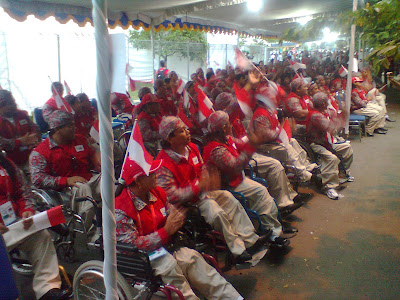 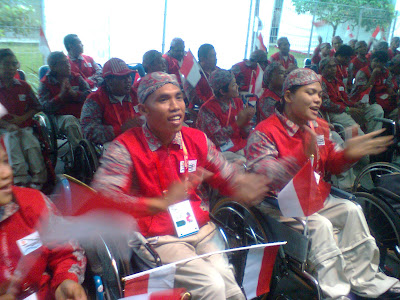 Tears Welled Up
Time showed at 7 PM when the rain fell lightly. All athletes could not bear their patience to start getting into the stadium and wave their hands to the people enthusiastically watching the ceremony.

At around 7:15 PM, all liaison officers got an order to prepare the athletes, and began taking them to the stadium for marching in front of 10,000 people inside the stadium.

Indonesian Paragames athletes were the last entourage to came into the stadium remembering that Indonesia sent more than 200 athletes for the event.

My heart beat very fast to get a warm welcoming yell from the Indonesian people flocking the stadium.

That was the first time for me to feel the sensation of being spotted by more than 10,000 couples of eyes.

Tears welled up on me eyes and I said in my heart, “Thanks Indonesian people, thank you very much for accepting and supporting us through this event; even though there are many more people with physical disabilities outside there could not get such a warm welcome from some of you…” 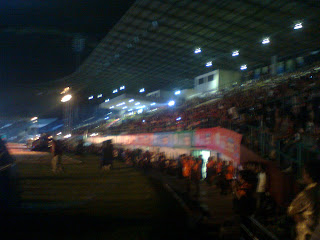 Soon when we stopped at our seats in the main field of the Manahan Stadium, a friend of mine received a call from his wife saying, “My husband… I saw your friend, Irfan, on the TV…”

Well, this may also the first time for me to appear on TV. 

This speech session, which looked like a speech competition, was closed by a speech from Indonesian vice president, and was followed by ringing the bell to sign that the Sixth ASEAN Paragames 2011 was officially started.

Spectacular lighting of the opening ceremony got much more beautiful when one-minute firework was launched. THAT WAS AWESOME…!

However, it did not stop here!

I, once again, burst into tears to see Mr Sabar – one foot amputee – climbed the stadium’s tribune with a rope, and of course, only with one foot.

With his right hand holding the torch of ASEAN Paragames, Mr Sabar used his left hand and his left foot to climb the rope leading to the peak of the main tribune of Manahan Stadium.

Soon when he reached the top of the tribune, he slid to the north tribune of the stadium and climbed a five-meter wall before finally he gave the torch to an one-hand swimming athlete.

Once again, firework show was launched when the one-hand swimming athlete lighted the squadron with the torch on his hand. THAT WAS AWESOME…!

It was the message behind this action made me cry indeed.

It appears that Mr Sabar and his friends with physical disabilities wanted to show the world that people like them could also create big things.

His brave action is also a message to the people with disabilities that they should not grieve for a very long time because grieving would not change anything.

The ceremony was followed with traditional cultural performances by hundreds of local dancers showing the world about the rich cultural heritage of the city of Solo.

The event was closed with a six-minute firework show on the sky of Solo City.

The night then turned to a colourful atmosphere with spectacular effect of the fireworks cheering the athletes and all people attending the ceremony. THAT WAS AN UNFORGETTABLE NIGHT, INDEED! 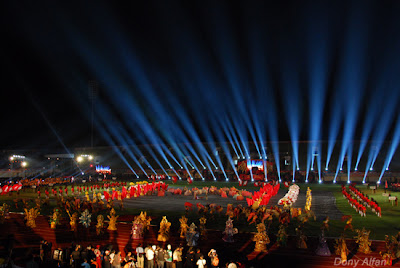 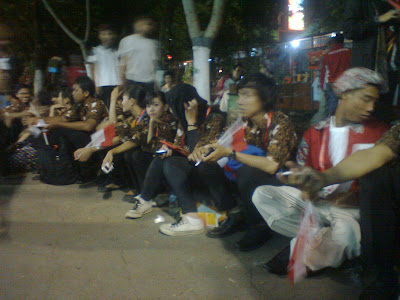 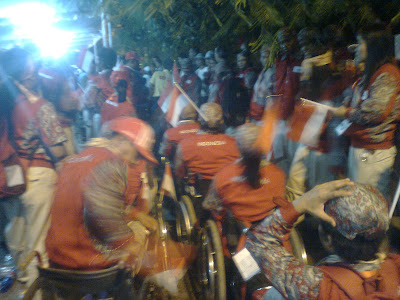 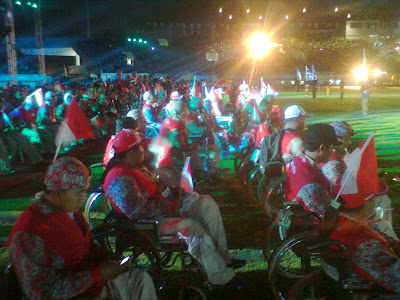 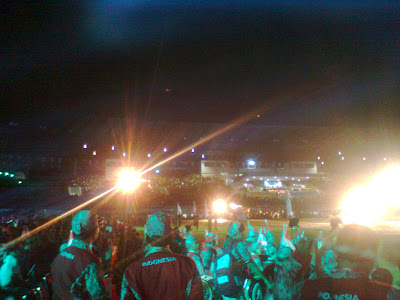 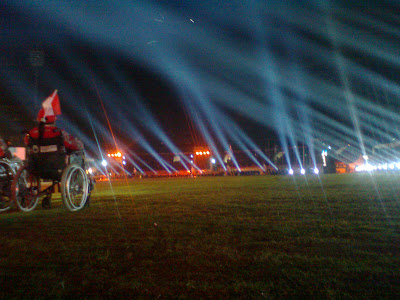 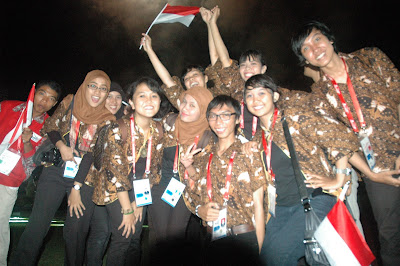 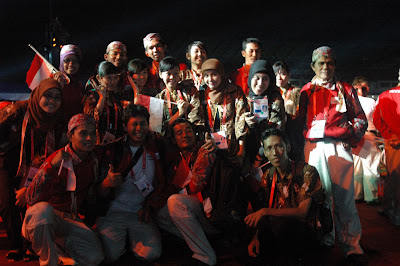 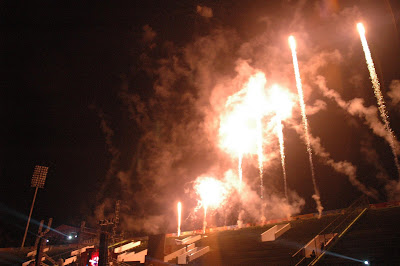