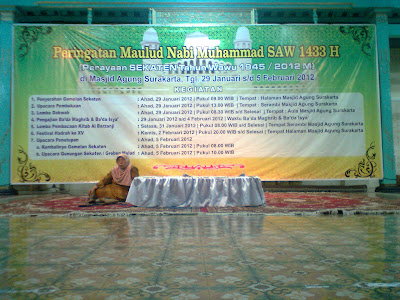 By Irfan Nugroho
Few days ago, I wrote about my visit to the Maleman Sekaten 2012, wherein I told you about what you can get, you can see, and what you can eat there, in the public fest called Pasar Rakyat (People’s Market).

I took another visit to the Sekaten Festival, but this time, the opening ceremony.

Yes, Sunday 29th January 2012 marked the beginning of the Grebeg Maulud Sekaten Festival 2012 that will be held in seven days ahead. Thus, this festival will end on February 5th, 2012.

The Sunday event was a sacred rite held by the Karaton Surakarta Hadiningrat in the front yard of the Masjid Agung Surakarta.

At this event, the Karaton Surakarta handed over two sets of Gamelan (Javanese traditional music instruments), namely Kiai Guntursari and Kiai Gunturmadu, to the management of the Masjid Agung Surakarta. 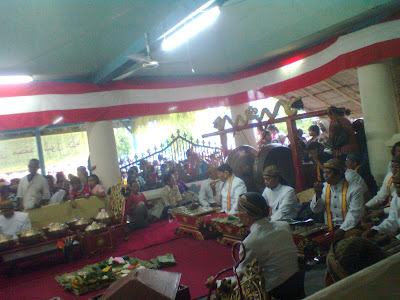 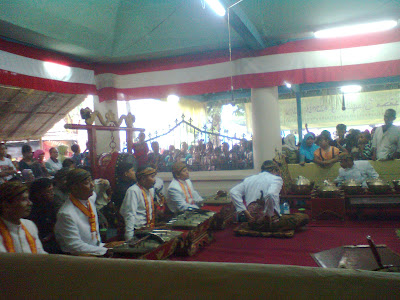 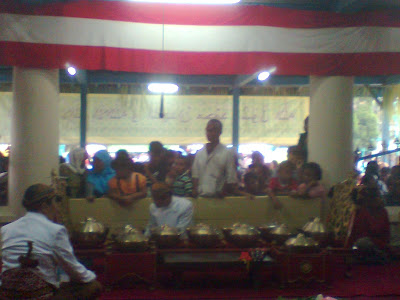 And now, why did the Karaton Surkarta give them to the Masjid Agung Surakarta? In fact, does a Masjid need traditional music instrument to preach Islamic teachings?

Well, there is no guidance from the Prophet Muhammad about the use of musical instrument to perform the Islamic dakwah (mission), actually.

And what you see at the Sekaten Festival can be categorized as an innovation in Islamic teaching and therefore I do not recommend any Muslim activist to carry out such an innovation.

However, there are numerous learning we can take from the festival. This article is aimed at scrutinizing the true intention of Sekaten Festival, and the derailment of meanings of today’s Sekaten Festival. 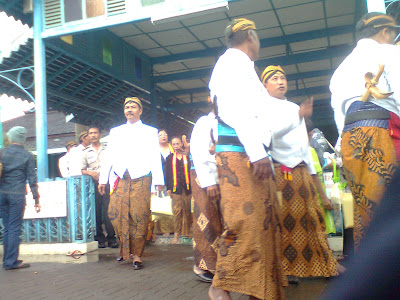 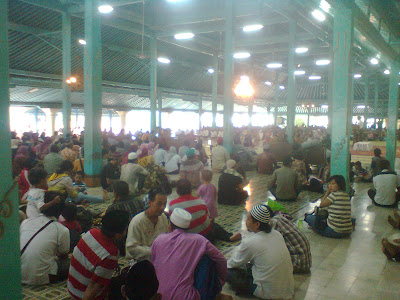 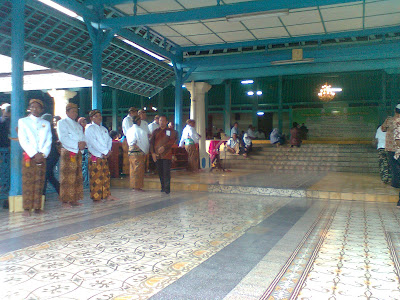 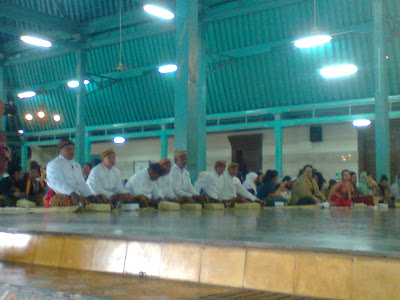 As I have told you in the previous writing, most of the Indonesian people in the past embraced Hinduism, and Buddhism, while some other more worshiped big trees and stones.

With the coming of Islam brought by the merchants from Gujarat, the Muslim scholars of the time did a number of ways to ‘save’ the local people from such a misleading rites of worshiping trees and stones.

It was not easy to convert the local people to Islam, they concluded.

For that reason, there should be an ‘innovation’ (known as ‘bid’ah’) in the Islamic mission held by those spreading Islam in the land of Java.

Amongst one of the innovations in the Islamic mission is now still known as ‘Sekaten,’ which is derived from Arabic ‘Syahadatain’ (testifying that only one God [Allah] having the right to be worshiped, and that Muhammad is His prophet). 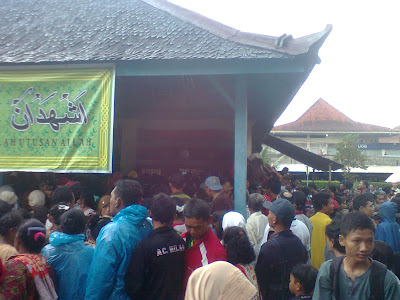 Muslim scholars of that time, known as Wali Songo (nine holy people), asked his students to play the Gamelan around the Masjid Agung Surakarta in order to introduce them with the Muslim’s worship place.

Some of their students then preached the local people gathering at the Masjid Agung Surakarta about Islam and finally ‘incited’ and ‘inspired’ them to take a close view of Islam and bring them into the safe path.

The Wali Songo understood very well that the use of Gamelan in the Islamic mission is not recommended by the Prophet Muhammad salallahu ‘alaihi wasallam.

He promised to use such a method of preaching no more only after the number of Muslims was huge.

Unfortunately, they passed away before making clear that such an innovation in the Islamic mission should be carried out no more.

Grebeg Maulud Sekaten Festival in the Present
As I have told you, the Wali Songo could not finally make an explanation to the Muslim ummah of the time.

In the other words, they failed to tell the truth that the use of Gamelan is not legally recommended in the Quran and the Prophet’s hadith.

Consequently, the Sekaten Festival is now regarded an event full of sacredness, mysticism, and symbols by the local people.

The Sekaten Festival is considered to be sacred and mystic because there are numerous ritual offerings in some corners of the festival.

Likewise, Wali Songo used certain symbols to tell the local people about Islam and the philosophy of life in Islam.

They used a number of household utensils to preach the local people of the time about Islam and how a Muslim should live in the world.

Therefore, you will easily find a number of earthen piggy banks at the Sekaten Festival because living in the world, a Muslim should collect a huge ‘savings’ (by doing good deeds) to run a good life in the hereafter.

Likewise, Wali Songo decorated the area around the Gamelan with full of Janur (young coconut leaves).

Janur derives from two Arabic words of “Ja” (already come) and “Nuur” (light); and in the past, the use of Janur was a hope that those coming to the festival would get the light of Allah.

Some of the Sekaten visitors in the present do not understand the message behind the Janur decoration, unfortunately.

Most of them flock to the Sekaten Festival with hope of getting mere Janur in real sense, not the true light of Allah like peaceful mind and sould, and performing Shalat when the Adzan is sounded.

At the Sekaten Festival, you will see a number of old women selling Kinang. 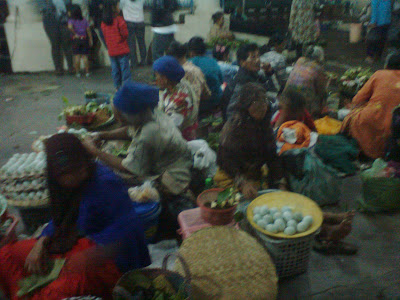 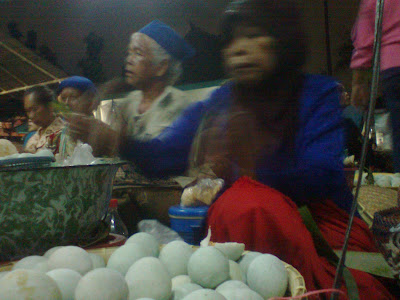 These ingredients were used by Wali Songo to tell the local people of the time that Islam consists of five pillars, Syahadat (represented by the betel vine), Shalat (Gambier), fasting in Ramadhan month (lime), zakat/Islamic tithe (tobacco) and performing Hajj to Mecca (betel leaf).

Well, in the present, the visitors of Sekaten Festival do not understand the messages behind this tradition of Kinang.

Two visitors I met during the event were joyously happy to get a tobacco installed as the decoration around the Gunturmadu Gamelan set.

She said, “This could make me stay young.” 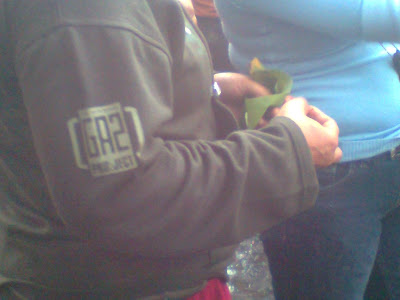 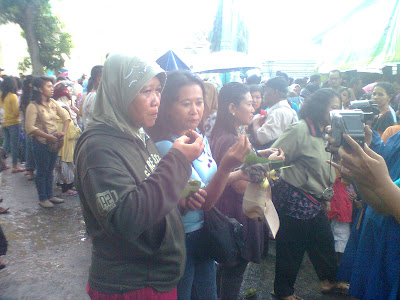 Well, one of the most interesting story in every celebration of the Sekaten Festival is a belief that those who want to get the ‘light of Allah’ should take a visit to the festival by walk.

I met with a man who was very happy to get the Janur in real sense, but I did not find him performing Shalat.

I asked him where he comes from, he said, “I come from Gunungkidul, Yogyakarta.”

“Yes, of course. I’m making tirakat (asceticism)” he said while smiling at me because indeed, he is a very smiling person. 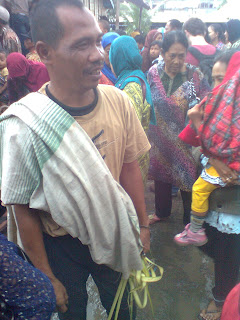 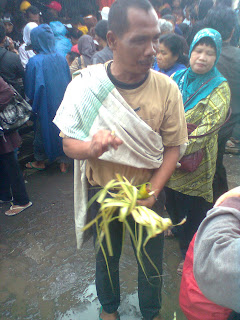 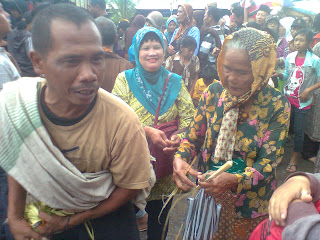 Suggestion for the Muslim Activists
Well, I do agree with an opinion that such a way of Islamic mission is not recommended in the Islamic teachings, as well as there are no examples from the Prophet Muhammad, the four rightly-guided caliphs, and the early generation of the Muslim ummah.

However, I do not suggest those who have the same stance as me to ‘condemn’ and ‘attack’ them because whatever innovation they have made, some of them are still a Muslim as long as they are committed in clear-cut polytheism.

Criticism should then be delivered in a much polite way; and prevent yourself from insulting the same Muslim just because they perform innovation in the Islamic teachings.

Allah says, “O ye who believe! Avoid suspicion as much (as possible): for suspicion in some cases is a sin: And spy not on each other behind their backs. Would any of you like to eat the flesh of his dead brother? Nay, ye would abhor it,” (Al-Hujurat: 12).

Then, continuing advice should be delivered with full and clear-cut evidence in order to get them back to the straight path of Islam, and leave behind such an innovation in the Islamic teachings.

Do you remember Allah says, “Those who reject (Truth), among the People of the Book and among the Polytheists, were not going to depart (from their ways) until there should come to the Clear Evidence,” (Al-Bayyinah: 1). Only Allah who knows the best. 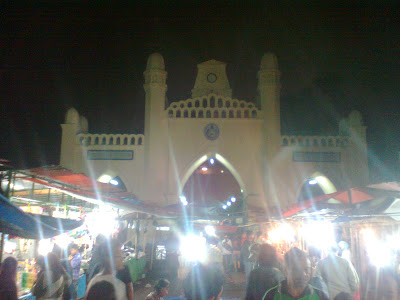 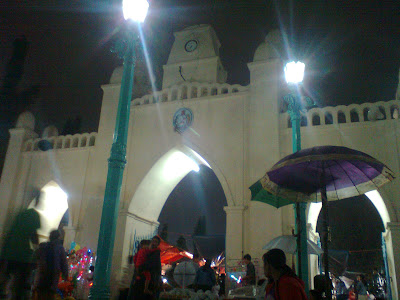 Recommended Tourist Site in Solo
If you are living outside of Indonesia and eager to visit this event, do not hesitate to contact me and soon fly here because this will end on February 5th, 2012.

This event is a good moment to see the uniqueness of Islam in Indonesia; and this is good for you to learn more about Islam.

For note, if you are non-Muslims, then you are not allowed to enter the main building of Masjid Agung Surakarta.

Taking a look of the event from outside the Masjid Agung is of course something magnificent, indeed.

So, welcome to Solo! And take a closer view of the mixture of Islam local culture in Solo, Indonesia. 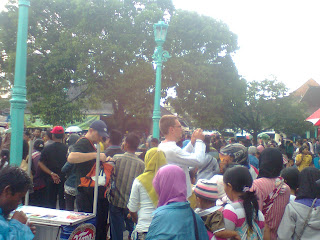 Fifth Day as Liaison Officer at the Sixth ASEAN Paragames 2011