Tafsir (Interpretation) of Surah Al-Qiyamah (1 – 15): Answer to Those Saying “Life is Once”

As Imam Ibn Kathir said that the Surah is actually about tackling the disbelievers’ denial about the Day of Resurrection. The disbelievers believe that if one dies, than he/she will not be able to be assembled (live again) to be judged in the Hereafter.

Imam Mujahid also interpreted the second Ayah (verse) of this Surah as saying that the Mukmin (believers) are sorry for what he missed (of good deeds) and they blame themselves for it. Once again, this habit is totally different from those Kuffar people who continue to do bad deeds.

Does man think that We shall not assemble his bones

Because the Kuffar people do not ever think about the Day of Resurrection, they then think that Allah is not able to assemble their bodies after they die. For those secularist people, there is a saying “life is once,” and this saying is totally wrong because human lives twice; that is in the world and the Hereafter.

Yes, We are able to put together in perfect order the tips of his fingers.

This is Allah’s answer to the disbelievers saying “life is once.” In this Ayah, Allah says that He can assemble every part of human body into a fully perfect body after one dies. “Allah will gather them, and Allah is quite able to put together one’s fingertips. This means Allah’s power is suitable to gather (and recreate) them, and if Allah wished Allah could surely resurrect someone with more than what he originally had. Allah could make one’s Banan, which are the tips of his fingers, all equal (in length),” said Imam Ibn Kathir about this Ayah.

Nay! Man desires to break out ahead of himself

He asks: “When will be this Day of Resurrection”

Well, surely the disbelievers will ask, “When will be this Day of Resurrection?” This question does also refer to the ‘logic-minded’ people’s statement asking “Then proves it now!” Allah knows well that such a question is not aimed at looking for the truth, but another denial to the Day of Resurrection. This is inline with Imam Ibn Kathir’s statement that this “question is only a question of denying its occurrence, and rejecting its existence.” See also Surah Saba’ Ayah 29-30.

Based on this question of the disbelievers, Allah says in the next Ayah:

These Ayahs are signs that the world will be doomed. That is the day when the “the moon is buried in darkness” (Ayah 8) and when “the moon and the sun will be joined together” (Ayah 9). In the Doom Day, all the planets’ orbits will be broken and one planet will hit another one. This also tackles the “2012” movie that calls an earthquake as a Doom Day.

On that Day man will say: “Where (is the refuge) to flee”

If you have ever watched “2012” the movie, then you will see that Allah’s statement in this Ayah (10) is quite true. In this Ayah Allah depicts the disbelievers’ hectically panic situation when they are being faced with the Doom Day. The disbelievers say, “Where is the refuge?”

No! There is no refuge! Unto your Lord will be the place of rest that Day

In reference to this, Ibn Mas’ud, Ibn Abbas, Said Ibn Jubair and other prominent companions of the Prophet Muhammad said, “There will be no salvation.” In another Surah (An-Najm: 42) Allah says, “And that to your Lord is the End.” In another Surah (Ash-Shura: 47) Allah says, “Answer the Call of your Lord before there comes from Allah a Day which cannot be averted. You will have no refuge on that Day nor there will be for you any denying.”

On that Day man will be informed of what he sent forward, and what he left behind

Well, in Islam, there is a belief that all one did in the world are recorded. For that reason, a true Mukmin (believer) would behave carefully, full of consideration whether or not something is good or bad in Islam. They eat halal foods, and prevent from eating haram food, etc.

In the Day of Resurrection, the record will be revealed. Nothing left behind because it is a very very comprehensive book. In this Ayah, Allah says, “On that Day man will be informed of what he sent forward, and what he left behind.”

In another Ayah (Al-Kahfi: 49), Allah says, “And they will find all that they did, placed before them, and your Lord treats no one with injustice.”

Nay! Man will be well informed about himself

In this Day of Judgment, people’s mouths are not able to speak. All parts of people’s bodies will speak – by the Power of Allah – about what they did in the world. Ibn Abbas interpreted this as, “His hearing, his sight, his two hands, his two legs and his limbs.” All these parts of the body – according to Imam Qatadah – will be “a witness against himself (people).”

Finally, human has no capability of arguing about the motives of their bad deeds they committed in the world. This can be seen in the next Ayah where Allah says:

Though he may put forth his excuses

About this Ayah, Imam Ibn Kathir said, “This means, even though he argues in defense of it, he is a witness against it.”

About this Ayah, Imam Qatadah said, “his excuses.) “Even though he will try to make false excuses on that Day, they will not be accepted from him

About this Ayah, Imam As-Suddi said, “This means his argument.”

Finally, to end the discussion about this, I will quote Allah’s statement in Surah Al-Mujadilah Ayah 18 where Allah says, 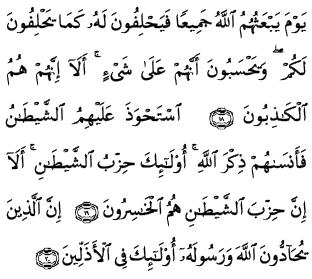 (18. On the Day when Allah will resurrect them all together; then they will swear to Him as they swear to you. And they think that they have something. Verily, they are liars!) (19. The Shaytan has overpowered them. So he has made them forget the remembrance of Allah. They are the party of Shaytan. Verily, it is the party of Shaytan that will be the losers!) (20. Those who oppose Allah and His Messenger, they will be among those most humiliated.)