Sekuntum Rosela Pelipur Lara: One Last Answer to Those Questioning the Jihad of Cyber Mujahid

By Irfan Nugroho
Several years after Bali Bombing, many are still in doubt and questioning the jihad conducted by either Amrozi, Mukhlas, or Imam Samudra. Not only the doubt comes out of those anti-Islam people, but also from the Muslim community indeed. And if there is one of you the one who is still in doubt about their Jihad, Sekuntum Rosela Pelipur Lara, written by Ust. Imam Samudra is one last detail answer.


Sekuntum Rosela Pelipur Lara is a book part of a bundle Goresan Pena Trio Mujahid published by Ar-Rahmah Media publisher. It was written by Ust. Imam Samudra, who was well known as the cyber Mujahid.


The book was released firstly in January 2009, and now has been republished in March 2009. This is the best-selling book because undoubtedly, many are curious of knowing and scrutinizing the Jihad of the trio Mujahid (Amrozi, Mukhlas, and Imam Samudra) as they were sentenced to death by the government of Indonesia.


The book is the answer to those questioning their Jihad. Likewise, this book details the misleading understanding of Islam upheld by Muslim groups claiming themselves “Salafy.”


Salafy is actually a term for one Muslim community that upholds the right understanding of Islam as well as follows the true paths of Islam based on the teaching of Muhammad and the early best generation of Islam. However, there are groups outside there claiming more “salafy” than the others. In fact, according to Imam Samudra (page 150), those calling themselves more “salafy” is actually following the principles of Murji’ah, and therefore they are best called “Khalafy” instead of “Salafy.”


This group, Murji’ah or Khalafy, do usually judge the excluding Muslim groups as “wrong groups,” “khawarij,” or another bad term as they want. Consequently, this group calls the trio Mujahid as “khawarij,” “dog of hell,” and other insults. In fact, many true Islamic scholars have agreed that Murji’ah is almost the same as Khawarij; that of misleading Muslim groups (see page 111).


The most eye-catching principle of Murji’ah is that a Muslim – member of Murji’ah group – may conduct all evil deeds as long as they have declared shahadah, stating that they have entered Islam by saying that they believe in Allah, and Muhammad is the prophet.


Sure, this is a big wrong understanding in Islam. Soon a person declared himself a Muslim, he/she must do all the things suggested by Islamic teachings, and prevent himself from any evil deed prohibited by Islam. The Murji’ah, on the contrary, let a Muslim do all evil deeds as long as he/she still believes in Allah and Muhammad as the prophet.


The Murji’ah judge every single group standing against the government as “kafir,” “khawarij,” or “dog of hell.” In Indonesia, this group will always back all the government’s policy that tends to discriminate the rights of Muslim people. As well, this group greatly supported the death sentence to the Trio Mujahid, who were keen to uphold the Islamic teachings based on the understanding of Muhammad and the early best generation of Islam.


The existence of Murji’ah, according to Imam Samudra is too much dangerous for the Muslim groups that are keen to follow the right understanding of Islam (page 113). That is why; he elaborated the difference of Murji’ah and the real “salafy” in many parts of this book. Indeed, the Murji’ah’s understanding has spread widely in Indonesia and many other Muslim populous countries. 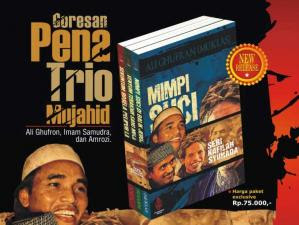 This book was written in a very good rhetoric way. Likewise, this book was written in a flowing writing style. This book is more Islamic academic than then two other books packed on Goresan Pena Trio Mujahid, such as Mimpi Suci dibalik Jeruji and Senyuman Terakhir Sang Mujahid. This book used many reputable references from many outstanding Islamic scholars who upheld the right understanding of Islam.

As you read the entire book, you might ask yourself, “Imam Samudra might probably true, but why I keep believe in this?” Yes, this book begins with the reason why the Jihad must be uplifted in Indonesia. Some answers you will find in this chapter, and some remaining reasons are in the last chapter.

Finally, this is the last answers from Imam Samudra to those questioning his Jihad in Indonesia. This is also the last work of him because he now has met his syahid (insyallah) as the bullet of government sticking his heart. Enjoy reading this book…!

The Fall of the West and the Rise of Islam: Islam Comes as Solution to the West’s Biggest Threat

Prophetic Dream at Prison: Learning from Good and Right Dreams